The twin towers of St. Mary's underwent a fundamental renovation from 2019 to 2021. Before there was also a phase of preliminary investigations and an analysis of the damage. The masonry was almost cracked due to moisture penetration and the increase in volume of the mortar. In addition, the corner ashlars of the towers had to be secured.

Replicated original mortar for the cracks

The men of the church construction workshop of the Lübeck-Lauenburg church district penetrated to the depths of the medieval walls. The corner ashlars of the towers were fitted with long threaded rods; the historic wall, including the cracks, was bricked up with gypsum lime mortar, which imitates the original mortar. In order to absorb new cracks, a nominal crack joint was formed and then grouted with shell lime. A total of 400 square metres of façade surface were renovated, 130 metres of cracks were closed and 93 corner blocks were secured with dry anchors.

Many supporters and funders

The renovation of the St. Mary´s towers cost a total of 1.5 million euros. It was financed, among others, with funds from the federal government's special programme for the protection of monuments, the Gemeinnützige Sparkassenstiftung zu Lübeck, the Friedrich Bluhme und Else Jebsen Foundation, the Possehl Foundation, the Deutsche Stiftung Denkmalschutz (German Foundation for the Protection of Monuments) as well as donations from the project "Sieben Türme will ich sehen" (Seven Towers I want to see). 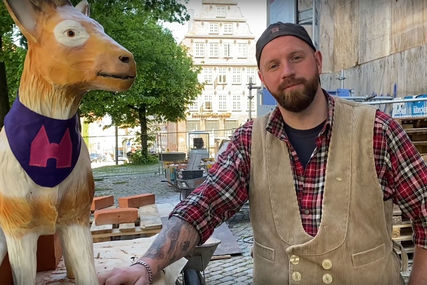 Zieglinde at the top: On the scaffolding at a height of 60 metres at St. Mary's, the "Free Goat Lübeck" interviewed Marco Quandt and his colleagues. more 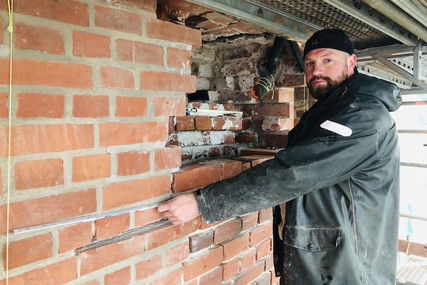 The lift on the scaffolding of St. Mary's rumbles upwards. It stops at level 24 - about the upper third of the 125-metre-high north tower. Here Marco Quandt, since the beginning of the year head of the Lübeck-Lauenburg church construction… more